Friday 23rd October, the Friday of the Gold Coast V8’s the other big event on the Gold Coast was the Labrador Schools Annual Box Car Derby sponsored by Auto Stop your local Repco Service Centre. 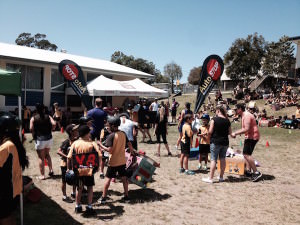 There was 4 grades competing for the honour of being the 2015 Box Car Champions for their Grade.  Congratulations to all students for well presented vehicles, I was amazed again this year with the thought, time and effort that went into preparation of the Box Cars.

The Teachers had the final race which was also of a high standard, the competition was fierce for this event ended up in a protest that was decided by student support during the presentations which help in the schools auditorium.

Pictured are the teaches lining up for their race, including was the teams called the Transformers, The Wrecking Ball, The P and O Cruise Ocean Liner and the Islander Girls team